The Latin word centuria denotes military units of 100 people. In fact, the centuria was a tactical Roman legion army – and if that’s the case, then the team at Centuria Capital Group is living up to its name. This year, Centuria celebrates its 20th year in business and, like a Roman army, we are forging ahead with our ambitious growth strategy.

More than 450 people attended our recent 20th anniversary party in Sydney, including many investors who have been with us from the start. Some of these now have their children investing with us. To date we have over 10,000 direct investors and of these 6000 would make 2-3 investments a year with us. I believe Centuria is one of the industry’s success stories and when I look back I’m incredibly proud to see where we have come, considering our humble beginnings. 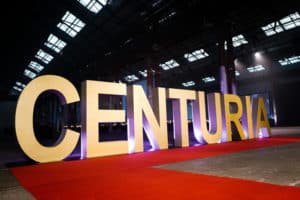 The origins of Centuria was a property investment consultancy I founded in Sydney in 1990 called the Hanover Group – so named because when I worked in London my office was in Hanover Square. At the time I formed it, there were only four people working there including my wife Trelise and my fellow director and business partner Jason Huljich.

Hanover Group went on to form a joint venture with Waltus Investments Australia, which was involved in syndicated property in its early stages and after that partnership ran its course, Jason and I formed Century Funds Management in 1999, where our main business was unlisted funds management or property securitisation.

As we became more successful, we were constantly being approached by buyers for our business, although we never expressed an interest in being sold. Despite this, we did decide eventually to sell to Rothschild as they were part of the largest private family business in the world and likely a good fit for our private investors. But before the deal was concluded, they pulled out of Australia.

We remained unconcerned about being bought but in 2006 were approached to sell to a friendly society, the Over Fifty Group. Following a board spill in 2007, I was asked to serve as CEO, although I wish I’d known the GFC was just around the corner. But we got through that with some careful management and sale of many of the Over Fifty Group’s non-performing businesses and by 2011, the business was debt free and in really good shape and we renamed the company Centuria Capital.

One of the businesses we kept from the Over Fifty Group was its investment bonds business which currently has funds under management of $900 million. When introduced many years ago, investment bonds were the government’s tax-advantaged offering for consumers to help them save for retirement. However, they started going out of fashion the day superannuation – with its clear tax advantages – was announced. We could have sold the investment bonds business any time, but I’ve always liked it – it gives us an additional revenue line and while it might seem to be an unusual companion to a real estate platform we believe it makes us unique and more defensive as a group.

Investment bonds now have tailwinds that weren’t there before so I’m expecting by the time we finish revitalising our product lines – which includes the imminent launch of 19 new contemporary investment options – they’ll be contributing even more to our revenue.

We got into REITs back in 2013 when Nicholas Collishaw joined us from Mirvac and we agreed that while our business was very strong on the unlisted property side we should consider listed property. Nick is a well-known property figure and he added a lot to the breadth of the business. While he has moved on with other personal projects he has remained on our boards and we enjoy a continued close relationship.

We now have our Centuria Metropolitan REIT and the Centuria Industrial Property REIT with about $1.5 billion and $1.1 billion assets under management respectively. They’re also both in the ASX300 – something our headstock is moving towards.

While there have been many refinements to our business model, at the end of the day we are a unique funds management business that’s retained its strong beginnings. In the early days we became known for our concise, clean and accurate documentation and we continue to have a reputation for being extremely competent, particularly around leasing and acquisition execution. Most importantly we are known for our willingness to put the interests of our investors first.

These days, Centuria is one of the fastest-growing real estate fund managers in the country. Our growth over time is particularly noteworthy. Back in 2005, we had $500 million to $600 million under management and this year we completed one deal that was worth more than that – the Hines office portfolio – where we bought four properties which added $645 million to funds under management.

The 2017 purchase of the 360 Capital real estate platform was another step change for us. Prior to the purchase, our market capitalisation was around $80 million and now it’s around $500 million. In FY16, assets under management (AUM) totalled $1.9 billion but by FY18 they’d grown to $4.9 billion. This past quarter they have grown further to $5.5 billion as a result of the Hines acquisition.

So, what’s contributed to our success? Centuria has high-quality real estate and a strong following in the investment community. The combination we offer of listed and unlisted property is also a key advantage. It means when one market is closed, the other is open. In October 2017, for example, the REIT market largely stopped.

I believe over the next couple of years, equity markets will continue to fluctuate strongly, affecting all equities including REITs, and especially their ability to raise capital. But during these times our investors will continue to invest in our unlisted property funds. I think we have a nicely balanced business and whilst the investment bond business has a smaller revenue component, the package sits together well.

The relationship between myself and Jason Huljich continues to be an important driver of our success. To my knowledge, we’re the only major property platform where the original principals are still in the business. He’s head of the real estate and funds management but we are effectively joint CEO’s. We work well together and don’t step on each other’s toes. Many companies our size tend to be run by one dominant personality – but Jason and I work very closely together with a tight knit team of highly experienced people, many of whom have been at Centuria for a long time.

What does the future hold? When people ask me how long I’m going be around, I say “forever”. I don’t mean I’m going to be doing the CEO job forever – there are people along side me who will do a good job of taking over when the time is right. These are crucial considerations when you are building an inter-generational business which you want to be around for many decades.

We’re very profitable. Our costs are well controlled and about 90 per cent of our revenue is recurring revenue. This means that we are not as heavily reliant on one-off transactions or performance fees as some of our peer-set.

Last year we bought over $1 billion of real estate. This is almost as much as groups twice our size. We can probably grow by 20 per cent each year just by being better than everyone else our size. Our assets under management have really taken off thanks to the REITs tripling the number of potential vehicles we have to acquire assets.

We have around 90 staff, many of whom have been here 10-15 years and I still interview every person who comes in – whether they make the tea or they’re an investment analyst. This isn’t because I don’t trust my heads of department to make the appointments, but I like to see whether our new employees are a good fit for our company culture as this is one of the ways we’ve successfully controlled the way we do business.

There is something very special about building a company from the ground up and I strongly feel everyone at Centuria is part of a community. We may be celebrating our 20th anniversary this year but I think with our strong growth, phenomenal team with their energy and fresh ideas, we are in a great position to be around for many years, hopefully ringing in the next centuria.