What’s next in industrial property investment: should you be looking at multi-storey warehousing in Australia?

On the face of it, multi-storey warehouses seem to be the perfect solution to the challenges of an industrial sector both constrained by a shortage of land and driven to improve efficiency by a competitive market. And in Asia, this is exactly the response we are seeing: sixty percent of industrial warehouses in Singapore are multi-level, and numbers are rising quickly in China as well.

So, what about Australia – do multi-storey warehouses really stack up for our markets?

No sector of the economy has been untouched by technology – and industrial property is no exception. Advances in technology have changed the way we perform daily tasks, buy the things we need and inform ourselves – and the flow-on effects are being felt by all businesses, sometimes in ways we may not have predicted. For example, many businesses that relied in the past on widespread physical distribution networks as their competitive advantage, are now struggling to maintain margins and margin differentials across markets, as the internet offers price transparency and online shopping options previously unavailable to consumers.

Online shopping has changed the playing field fundamentally for retailers. And as consumers’ focus has shifted to delivery speed, there have been flow-on effects in the way goods are warehoused and shipped; logistics are managed; and to the kind of industrial property most in demand. Warehouses located close to consumers – or at the very least close to logistics and transport hubs with access to main roads – have become highly sought after. So it would make sense that in locations close to consumers, where industrial land is at a premium, multi-storey warehousing could offer a solution.

In Asia, land for development is at a premium

In Asia, for these and other reasons, multi-storey warehousing has been on the rise for some time.

Population density is higher than here at home and greenfield sites are almost non-existent. As a result, sophisticated urban planning is a necessity. Competition between residential and industrial developers is fierce, yet because residential development is a higher density use of land, it is incumbent on planners to find ways of allocating to industrial land without losing sight of the highest and best use of a scarce resource.

The solution to the conundrum in many areas has been to move to multi-storey warehousing – and to build transport links to match.

But in Australia, market conditions are different

In my view, here in Australia conditions are such that multi-storey warehousing is still a way away in the future, for a number of reasons:

Australian urban planners have typically sought to replicate city CBDs in other, secondary areas of cities, in a way that is not usual in Europe or Asia. In Sydney, areas such as North Sydney, Campbelltown and Liverpool have been developed and presented as CBD-alternatives, but specific spaces for industrial areas have not been set aside in a planned way.

Multi-storey warehouses can employ large numbers of workers, which can cause a problem if transport is not efficient. Urban planning is of a very high quality in Asia. Most workers catch public transport and as a result, industrial areas are well-serviced by public transport. In Australia, the situation is very different. Most workers in industrial areas drive to work – our cities are more spread out, and transport links are often inadequate or non-existent. More workers would require more car spaces and put more pressure on roads, many of which are already struggling to cope with our increasing population. If multi-storey warehouses were to be built in place of existing traditional warehouses, the volume of cars and trucks needing to get in and out of such areas would pose a serious challenge to the road network.

The NSW State Government is currently investing significantly in infrastructure, but the majority of this is not specifically designed to service industrial areas. In fact, the areas of Sydney that would most benefit from multi-storey warehousing – Chullora, Mascot and Silverwater for example – are already congested with traffic from local residents as well as existing industrial development. It’s difficult to envisage these areas coping with a massive influx of workers without a significant pre-investment into new transport infrastructure and this will not happen overnight.

South Sydney has been touted by some as a suitable candidate for the first multi-storey warehouses in Australia for a number of reasons.

Firstly, South Sydney is unique in its proximity to the CBD, the airport and Port Botany. However, residential development has risen sharply over the past decades and a significant area of industrial land has already disappeared as a result, increasing demand for industrial sites and pushing up prices.

What’s left of the industrial areas has to work much harder and this is the basis on which multi-storey warehousing has been touted as an option.

At the same time, the Australian Government has created (and owns) the Moorebank Intermodal Company, which has been established to develop an intermodal terminal in Moorebank in Sydney’s south-west, with the aim of managing expected growth in freight moving through Sydney.

The project aims1 to create 6,800 jobs and to reduce congestion growth in south-western Sydney by using rail rather than trucks to move shipping containers, thereby reducing the number of trucks on the road. It’s unlikely, given the investment in this terminal, that further warehouses that rely on movement by truck will be developed in the near future.

In conclusion, Asia and Australia are very different markets when it comes to industrial property and its uses. There is a shortage of greenfield land for new industrial sites in Australia, but not to the same extent as Asia by any means. In addition, our population is located differently, in residential areas that are often located further away from industrial spaces than more densely populated cities. Public transport is also a problem in Australia. It has been developed to service residential areas, which means many workers in industrial areas drive to work.

Furthermore, from an ownership perspective, potential revenue from multi-storey warehouses is higher than that from a traditional warehouse, but in order to benefit from increased revenue there are a myriad of operational challenges which would require significant investment to address. Owners’ business models would need to change: currently, users of industrial space are charged on a per-square-metre basis, whereas multi-storey warehouses imply a through-put model, which charges according to the number of trucks or other vehicles moving through the warehouse. For this to be possible in Australia, road infrastructure around industrial areas would need to be much improved. If it isn’t, the sheer increase in congestion associated with moving many more vehicles through a small space would negate any benefits of the larger warehouse space.

At this point in time, weighing up the pros and cons, it doesn’t look like multi-storey warehouses are the solution to space constraints in industrial markets in Australia. In fact, at present they seem to raise more challenges than they offer solutions.

So what does this mean for the industrial landscape in Australia now? My view is that there may well be a case for multi-storey warehousing in Sydney and in other major cities in time. And as AI, specifically robotics and automation, continues to change manufacturing and eliminate some jobs, friction points will also change – as will the challenges of warehouses. At present, however, it’s difficult to see multi-storey warehouses stacking up.

Therefore, until the landscape changes, warehouses in central locations, close to existing transport and logistics hubs, will continue to be in strong demand and offer a premium to users in Australia. 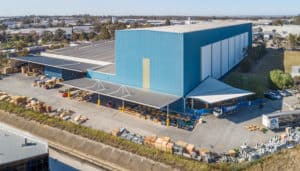 Disclaimer
This article contains selected summary information and does not purport to be all-inclusive, comprehensive or to contain all of the information that may be relevant, or which a prospective investor may require in evaluations for a possible investment in Centuria Capital or its subsidiaries. It should be read in conjunction with periodic and continuous disclosure announcements which are available at centuria.com.au.
This media release is provided for general information purposes only. It should not be relied upon by the recipient in considering the merits of Centuria or the acquisition of securities in Centuria subsidiaries.
Centuria Property Funds Limited (ABN 11 086 553 639, AFSL 231149) and Centuria Property Funds No. 2 Limited (ABN 38 133 363 185, AFSL 340304), subsidiaries of the Centuria Capital Group, are Responsible Entities of Centuria’s listed and unlisted property funds. These funds are issued under a disclosure document that is available on Centuria’s website for all funds open for investment. An investment in any of Centuria’s property funds carries risks associated with an investment in direct property including the loss of income and capital invested.
Before making an investment decision, the recipient should consider its own financial situation, objectives and needs, and conduct its own independent investigation and assessment of the contents of this announcement, including obtaining investment, legal, tax, accounting and such other advice as necessary or appropriate.
This article may contain forward-looking statements, guidance, forecasts, estimates, prospects, projections or statements in relation to future matters (‘Forward Statements’). No independent third party has reviewed the reasonableness of any such statements or assumptions. No member of Centuria represents or warrants that such Forward Statements will be achieved or will prove to be correct or gives any warranty, express or implied, as to the accuracy, completeness, likelihood of achievement or reasonableness of any Forward Statement contained in this media release.